Pictures of Susanne and Mirko Gersak are focusing object forces, which are operating in the nature and in the human being; but also natural phenomena and processes of transformation and development, are focused. Own observations in the nature and the study of elements, myths and nature philosophies of different cultures are their inspiration. Unalloyed steel will be used as an adequate material; due to his tendency to corrode it is also part of the changing nature; it behaves accordingly to the law of nature. Consequently the creation of an object is a dialogue between the poles of "material will" and artistic form. All colourings and structures develop directly out of the metal surface, no additional mediums, like e. g. colours will be used. 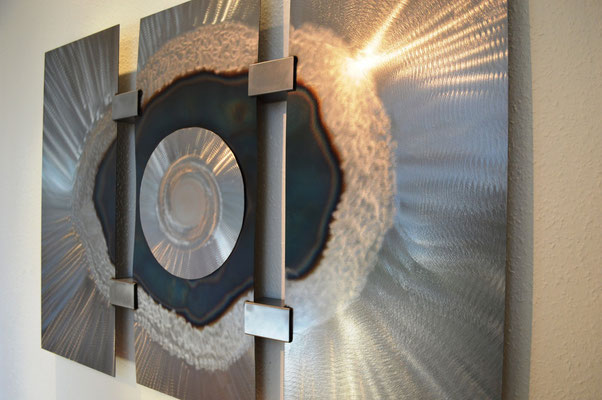 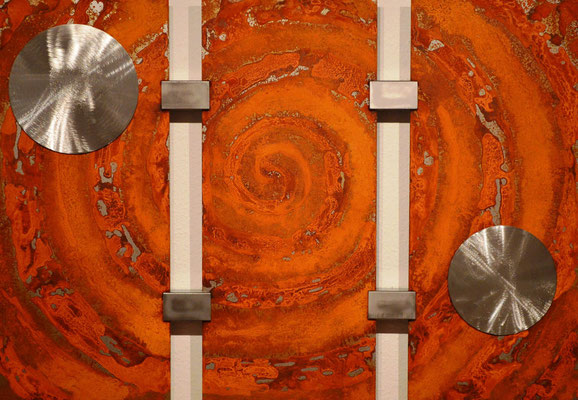 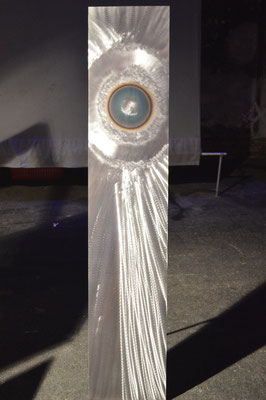 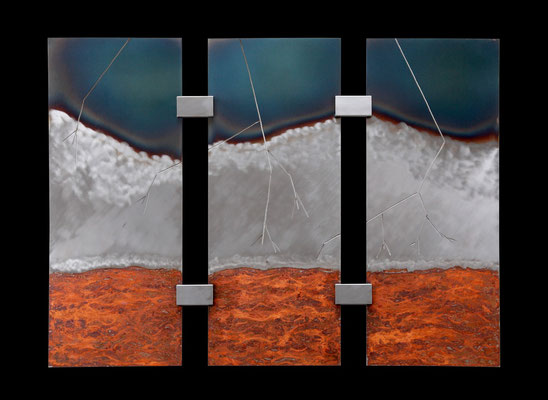 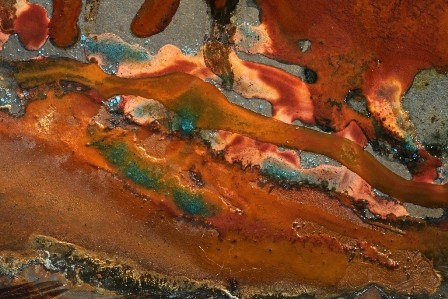 Art of metal - The nature of the material

The tendency to oxidation is a material property which is very interested for us, additionally the specific behaviour during the heating (deformation, blue staining) and its particular suitability for the reflection of light. The forming of a layer of rust belongs to the nature of the material; it is the inherent power that makes it to a "living" material. It transforms itself according to the laws of nature, for this it is actively. It opens into space and lets it penetrate. At the same time, time this process allows the beginning of the destruction of the "artifact" steel which ends with the return to the original state of the iron. Our work begins with the triggering of the oxidation process. Corresponding to the subject of the picture, a certain substance will be applied in a particular way to the surface. The used procedures in order to produce rust in different colours and textures are the results of own experiences and experiments.

After initiation of the process we are entering into a dialogue with the work. The material goes its own way, and produces internal structures. They can enrich or disturb the image. In the latter case the oxidation process will be directed in a different way or it will be stopped. Parallel to the oxidation process, we start to form the material by brushing, polishing or engraving. During the oxidations the surface opens to the space, but in this process it is our purpose to structure and to change the material. The transformation which must be considered is the influence of the light of the reflecting surface. It is necessary to find the direction of the hatching; it creates the desired synthesis with the support of the light. Some topics also require the process of heating, in order to achieve a certain colour or deformation. For us it is important, that the behaviour of the material follows its internal laws.

The artist`s central themes in their objects are forces acting in nature and in man, natural phenomena and processes of transformation and development. Own observations of nature, but also the study of the doctrines of the elements , myths and nature philosophies of different cultures inspired them to create their pictures. As an adequate material they use steel, which by its tendency to corrode is even part of the changing nature and behaves according to the laws of nature. The creation of an object is thus a dialogue between the poles of "material will" and artistic form. All colorings and structures develop directly out of the metal surface.

Metal wall art - the creation of a picture

After some preliminary studies, the idea for a work is slowly taking shape. Now it will be created of the raw material, the steel panel. We start experimenting with the help of water, salts and acids, by brushing, spraying and watering cans. After a few days the first rust structures will be visible. Perhaps it will be possible to discover something which had not been planned, but possibly it will be very fascinating and evokes some associations. Other structures will be intensifies due to the mentioned instruments. Many times it will be necessary to transport the sheets back and forth. For some subjects it is necessary that the sheets will dry quickly in the sun in order to apply again new liquid. But it is important to keep them dry overnight, because raining could destroy all the work. The completion of a picture will take many weeks. If the rust structure has reached its final form, we start the work on the other parts of the picture. Bare spots need to be polished. Fine structures must be ground into the bare metal to make the surface alive.

Depending on the position and light conditions the surface shimmers differently and competes against the grating structures. A contrast that characterizes our images and sculptures, a contrast between shiny and rust, cold and warm, the work of man and of the nature, appearance and reality. The metal surface offers unlimited design possibilities. Additionally to the mentioned processes of the rust and burnishing, are existing numerous other possibilities to express in this material: heating of the metal, engraving or welding of metal. The work with metal is chameleonic and offers again and again possibilities for new discoveries.

Rust as a creating force

In the modern art, rust was always associated with the Vanitas theme: The occurring signs of corrosion should remember that one day the material would break down completely – also a visible perishability of the material. The burying and slow rotting steel cube of the artist Sol Le Witt as well as the lacquered portraits of steel, which will be slowly eaten away (Holger Pohl) by the rust are showing the dominance of the material above the artistic forming. We would like to oppose the connotation of the rust with another aspect: It is important for us to show the ascetic of the rust as a creative force. A force which does not exact a destruction of the form, but which behaves like a worthy counterpart in dialogue with the “will of the artist”. It is a constructive force which participates in the development of the image.

Designing with rust is like a road with many bends and branches. It is possible to plan the general direction, but you have to allow unforeseen detours. This interplay with the contingency - in fact, it is a collaboration with the contingency -is our driving force during the creation of a work. 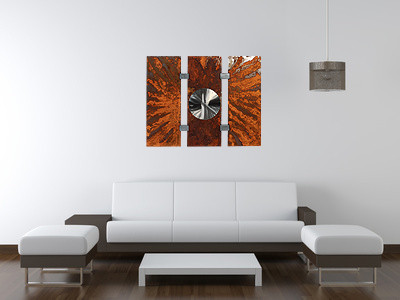 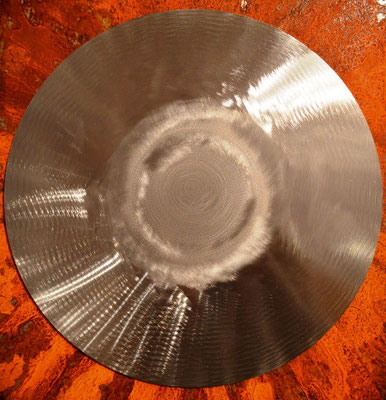 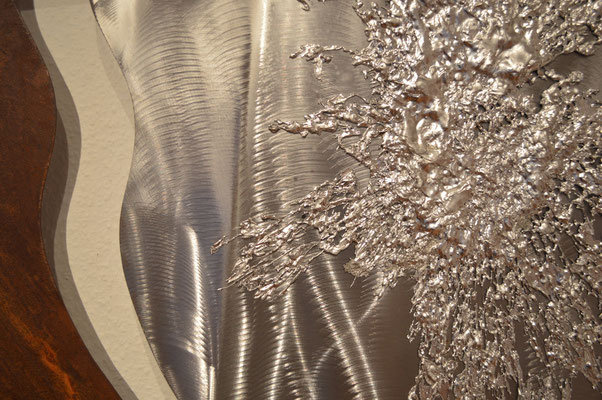 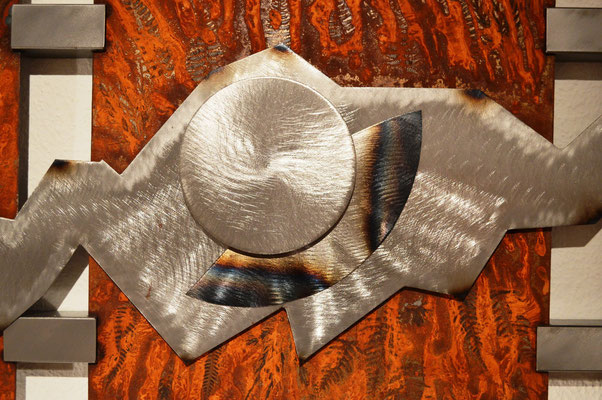 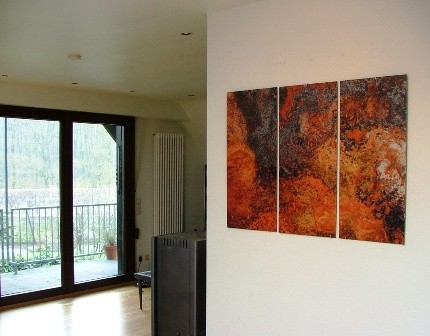